If you know Revelations you’ll know that one of the last things the world leader will attempt before the end of time will be to unite the churches and governments. The UN has been working on the “New World Order” (video here) for years, now the pope is uniting all churches.

The first big event I noticed was what tony palmer said in this video here.

Now the pope is visiting Queen Elizabeth II. A little fact I just learned, the crown she has actually belongs to the pope. Okay, now to the story:

Vatican City (AFP) – Queen Elizabeth II meets Pope Francis for the first time on Thursday on a visit that coincides with the anniversary of the start of the Falklands War between Britain and Argentina.

The royal, who is “supreme governor” of the Church of England, will also be meeting the Argentine pope against the backdrop of thorny Anglican-Catholic relations.

The foreign trip, a rarity these days for the 87-year-old monarch, had to be postponed last year because she was unwell. She will be accompanied by her 92-year-old husband Prince Philip.

Their audience with the leader of the world’s Catholics at 1300 GMT will come after a lunch with Italian President Giorgio Napolitano, a former communist with a similar largely ceremonial role to that of the British royal family.

The couple’s last foreign trip was to Australia in 2011, and the one-day visit to Rome and the Vatican will last only a few hours, without much of the pomp usually associated with royal travel to avoid tiring the ageing royals.

While the talks are likely to be purely formal, Anglican-Catholic ties are an issue because of resentment in Britain over the Vatican’s move to bring in hundreds of conservative Anglican priests who dissented from the Church of England over female ordination. 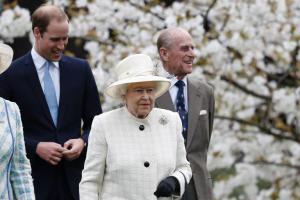 But relations between Pope Francis and the Archbishop of Canterbury Justin Welby, the spiritual leader of the Church of England, are cordial and the two last month adhered to an inter-religious initiative to combat human trafficking.

The Anglican church, which separated from Rome after the divorce of King Henry VIII in the 16th century, has around 80 million faithful compared with the world’s 1.2 billion Catholics.

– ‘White smoke over the Falklands’ –

The queen has visited the Vatican twice during her reign — once to meet John XXIII in 1961 and again in 2000 to see John Paul II — both of whom are being made saints in a first-ever double papal canonisation later this month.

She also met with pope Pius XII in 1951 — a year before she became queen after the death of her father King George VI — and the queen met with now pope emeritus Benedict XVI in Edinburgh when he visited Britain in 2010.

Another potentially divisive issue is the British-ruled Falkland Islands — referred to in Argentina as the Malvinas — to which Latin America’s first pope has shown he is sensitive by once referring to them as “ours”.

Argentine forces invaded the islands on April 2, 1982, but were forced to surrender 74 days later after a British expeditionary force recaptured them in fighting that left 649 Argentinians, 255 British and three islanders dead.

Following Pope Francis’ election last year, Prime Minister David Cameron said he “respectfully” disagreed with the pope, after a referendum, also in 2013, in which 99.8 percent of Falkland Islanders voted in favour of remaining British.

“The white smoke over the Falklands was pretty clear,” he quipped — a reference to the smoke signal used by cardinals in the Sistine Chapel to show that a new pope has been elected.